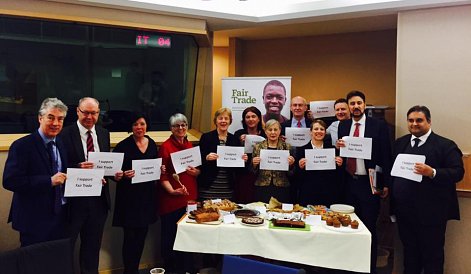 During Fairtrade Fortnight there were lots of Fairtrade events going on at home, in Westminster and in Brussels – we even had a fundraising Fairtrade bake off in the European Parliament which raised £720 for our International Women's Day Charity, the IRC, which is supporting Syrian women refugees in Jordan. During the fortnight, as you can see from the photos, I had the opportunity to visit some great local events including the Big Brew coffee morning in Grimsby as well as a coffee afternoon at Louise Haigh MP's office in Sheffield Heeley and I attended a meeting of the All Party Parliamentary Group on Fairtrade at the House of Commons.

Preparing for the Great European Fairtrade Bake Off

Fair Trade has really taken off in recent years with more people buying products.  After a slump after the economic crash, sales of Fairtrade products have risen for the first time since 2013, now worth £1.64bn in the UK. And here in our region, there are plenty of specialist Fairtrade local shops.  Larger retailers are involved too: Sainsbury’s and Waitrose only sell Fairtrade bananas, Lidl has its own Fairtrade brand for certain products called Fair Globe and the Co-op, active on Fairtrade products for 20 years, has recently announced they will only use Fairtrade cocoa in their own products.

With Holly Lynch MP and the APPG on FT, in Grimsby with the children from More Good News Youth Group and at Louise Haigh MP's coffee afternoon in Sheffield!

You can read about Linda's 2016 Fairtrade Fortnight campaign by clicking here.